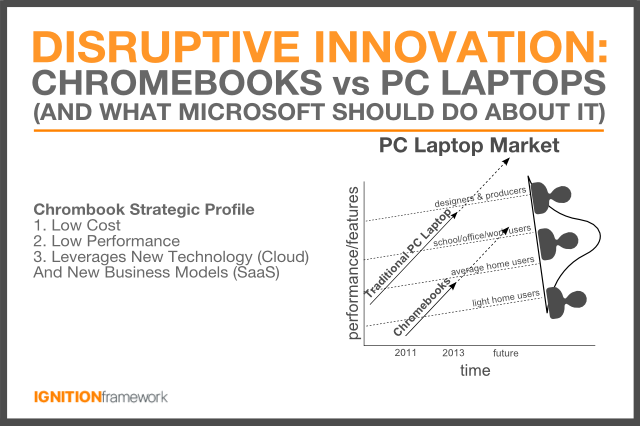 A few weeks ago a good friend of mine asked my opinion on what kind of laptop he should buy to use in his business classes in college. His first question was “What do you think about these Chromebooks, would they work?”

Hmm…I thought about it for a minute then suggested he search for a good “ultrabook” (a high-performance laptop that is lightweight and has long battery life) instead simply because he will likely need the full versions of Excel and PowerPoint at some point in his classes. His question piqued my interest though and prompted another question to form in my mind: “When will Chromebooks be ready for use as a college student or business professional?”

The thought was intriguing, especially given the recent statistics on Chromebook sales… Late last year the NPD Group reported a stunning fact about computer sales in 2013. Citing that report, the LA Times said this:

While Apple and Microsoft saw their share of laptops sold to businesses and other organizations in the U.S. decrease in 2013, Google dramatically increased its portion of sales…With that increase in sales, Google’s Chromebooks accounted for 21% of laptops sold in the U.S. during that period, “up from negligible share in the prior year,” according to the report.

This is the same laptop concept that reviewers scoffed at in 2011 when the first Chromebook, the Samsung Series 5, launched. An LA Times reviewer had this to say about it:

I tried valiantly to use the Samsung as my main machine, but by the end of a week, I was about ready to toss it like a Frisbee.

Maybe the Chromebook concept would fly if it cost $180 instead of $500. Maybe it makes more sense if you rent it (students and corporations can lease Chromebooks for $20 to $30 a month). Maybe it will fly once this country gets free coast-to-coast 4G cellular Internet, which should be just after hell freezes over.

For now, though, you should praise Google for its noble experiment. You should thrill to the possibilities of the online future. You should exult that somebody’s trying to shake up the operating system wars.

But unless you’re an early-adopter masochist with money to burn, you probably shouldn’t buy a Chromebook.

Walt Mossberg, the famous tech reviewer from the Wall Street Journal, also had this to say:

My verdict is that, while the Chromebook is a bold idea that may be a harbinger of the future of computing, it’s too limited and buggy today to be the main computer relied upon by mainstream users. I can’t recommend it over a standard laptop, except perhaps as a secondary machine for techies or early adopters.

As mentioned above by the LA Times reviewer, in 2011 Chromebooks were priced at $500, practically equivalent to the price of a low-end PC laptop. This pricing strategy didn’t make sense given the value of Chromebooks was lower than even what the low end of a Windows laptop offered simply because of the full MS Office functionality and availability of all standard applications such as iTunes. However, at some point in 2012 or 2013 Chromebook manufacturers honed in on the value justified price of Chromebooks and found a sweet spot of between $200-300. It’s hard to find a new PC laptop, even on the low-end, in this price range. At this price, home use consumers justified the trade off of losing full MS Office and bought the Chromebook.

Why Chromebooks Are A Disruptive Innovation This scenario illustrates yet another textbook example of disruptive innovation. Upon launching this blog, one of the first post’s I wrote was titled “What Everyone Should Know About Disruptive Innovation.” The goal of the post was to explain the concept in terms of the framework that Clayton Christensen originally espoused. His point was that there was a pattern to innovation and that it followed a repeatable set of circumstances. I won’t repeat the theory here but will further expand on how Chromebooks fit this model to a T.

To set up the disruptive innovation framework, I will make the following assumption:

This grouping of customers represents the distribution of customers relative to performance and value needed. Over time, the needs of all of these people gradually increase as they learn to make use of new features and power. See the graph below: As mentioned earlier in the review above, in 2011 the Samsung Series 5 Chromebook had a number of problems. First was the $500 price tag which was not justified relative to the value it provided. Second was the Chromebook’s paltry capabilities – few apps, no desktop and difficulty setting up printers were just a few of the issues. Even if it were priced at $200, it’s questionable it would have been a success.

PC laptops however were doing relatively well, especially in a new category called “Ultrabooks” which were lightweight and powerful laptops with long battery life but without a CD disk drive included. These machines caught on well with the college students and travelling professionals who needed high performance, lightweight and a long battery life.

Fast forward to 2013 and we see the Chromebooks with lower prices, better performance, more applications and printers that come with Google Cloud Print capabilities. In addition Ultrabooks continue to get faster, lighter and with higher battery life than ever before.

From the graph we can infer that Chromebooks have achieved a performance level (in addition to the lower price) that starts to fulfill most light home user needs and is encroaching on filling the needs of average home users – a large part of the overall market. However, in 2013 it’s still safe to say that Chromebook’s performance doesn’t quite achieve the level needed to meet the needs of college/office/work users.

Also notice that the traditional PC laptop continues its steady march into over-designed (and expensive) territory – performance that only the most sophisticated customers such as gamers need from a laptop.

If the model holds true (countless cases have shown this model to be predictive) then the future for Chromebooks is bright. Just extrapolating the graph alone shows that the next big market segment for Chromebooks to penetrate is the college/office/work users. Once Chromebooks achieve performance sufficient for most college/office/work users, the traditional PC laptop will become a high-end niche product. That is unless Microsoft devises an effective response and pre-empts Chromebooks with something new of their own.

What Microsoft Should Do About It Let’s explore the options Microsoft has. The way I see it, they can do one of two things:

Why Windows RT Failed: A Quick Detour Into Disruptive Enablers

For example, consider the difference between Windows RT and Chrome OS. Chrome OS, which runs on all Chromebooks, is disruptive because it leverages new technology – cloud computing and web-based applications – and has sufficient runway ahead to enable new and valuable experiences for consumers. Windows RT however, does not leverage the cloud or any other new technology and the only thing ahead on its runway is a full blown version of Windows 8.

Many technology enthusiasts agree that as web applications mature and as cloud computing gains further traction, consumers will be exposed to new and valuable ways of interacting with their computer. Chrome OS already makes software updates seamless and automatic as opposed to the nagging that Windows does when it needs to update. Other benefits such as continuous saving and automatic document revision control are built in to many web applications including Google’s own Google Drive office software.

Back To What Microsoft Should Do

My answer: Microsoft should develop and launch a Windows Cloud OS (the title can be whatever but I personally favor this).

If Microsoft wants to remain relevant in a world of cloud computing, it needs to move further than just making Windows 7 touch-friendly (Windows 8). They need an answer to Google’s Chrome OS and the way to do it is to build a version of Windows that is essentially a browser that helps consumers use their SkyDrive and Office 365 products seamlessly as if they were running on the machines themselves. License this new Windows Cloud OS to OEM’s, such as Dell, for free to ensure the price of the overall computer can be competitive with Chromebooks and charge low monthly subscription fees to consumers to use advanced web applications such as Office 365.

Microsoft doesn’t need to die and can save itself if it comes to the stark realization that the market is shifting quickly underneath their feet and unless they jump wholly onto the cloud computing bandwagon, they will be left behind.

Meanwhile, the next time a friend in college asks me for advice on what computer they should buy, I’ll probably tell them to get a Chromebook!