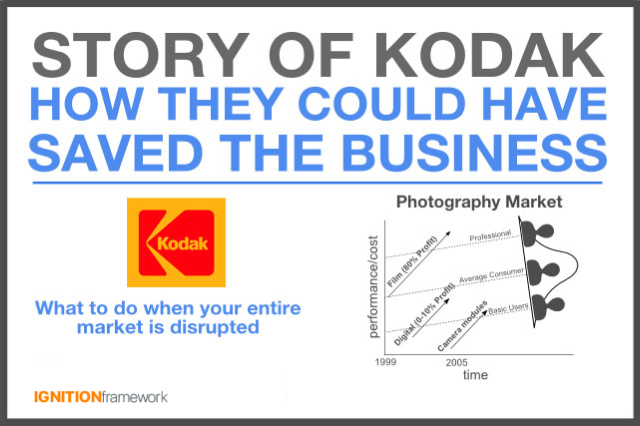 Few business cases are as rich with soaring success and abrupt failure than the story of Kodak. What was once considered a hub of technological wizardry suddenly became a bankrupt institution with little hope of surviving much longer into the future.

All of this begs the question – what happened? Why was a company, full of intelligent people, so slow to adapt to a market that though seemed to change over night, actually transformed itself over the slow period of roughly 20 years?

To answer these questions, let’s analyze the market for film and the emerging competition from digital cameras. From this graph we can conclude three things:

But this graph is just the output of what happened – or the end result. It doesn’t explain why this market changed so dramatically. To understand that, we need to analyze the economics underlying the photography industry.

The fundamental economics of photography

The fundamental economics of photography can be described as follows:

If you assume the storage is film and processing is taking the roll of film to the drug store for printing, this pretty much sums up the costs incurred for photos during the days of film. In digital photography the storage costs rapidly go to zero (cost of memory that is amortized over limitless reuses) and the processing price is also zero if you can simply share your photos online through social media.

With this as a framework, in 1999, Kodak’s best year, the cost of a photo could be calculated by assuming the use of a one-time-use camera which was both the roll of film and camera built into one disposal device. These can still be purchased today for $10-15/ea. The processing price was the cost to have the exposed film processed by a processing location (usually in places like supermarkets or drug stores). This usually cost around $3-5. So the cost of a fully processed roll of film, which usually held 27 pictures, was roughly $15.

On a per image basis, this comes out to 56 cents.

If you assume a multi-use film camera that sells for $500 and lasts through 200 rolls of film (or 5400 photos) then the costs would be as follows:

On a per image basis, this comes out to 54 cents – the majority of the cost being driven by film costs (or storage) and processing. Practically the same as the one-time use cameras. Even if the camera itself was free, the overall cost would still be $12/roll. This is why one-time use cameras became so popular before the price of digital cameras came down.

This was Kodak’s hey day. At 80% margins on a roll of film, the company had every incentive to keep film around for as long as possible.

Kodak’s profit party wouldn’t last though because soon the economics of digital cameras would prove to decimate their business model.

As digital cameras began to emerge in the early to mid 90’s many people couldn’t justify purchasing them mostly because of switching costs involved. Digital cameras of the day required the user to have a computer to process the images on and a printer to print them out for sharing with others – a process that was foreign to all but the most techie of consumers. At the end of this process, the images didn’t look as good as film-based photos either. But as digital camera capabilities improved and more computers became mainstream along with internet access in the late 90’s, sharing high-quality photos became as simple as sending an email. With storage and processing costs virtually eliminated from the equation, the only thing digital cameras needed was time before they came to dominate photography. Several estimates of the iPhone bill of materials list the camera somewhere between $5-15.

The graph above pretty much says it all. Let’s analyze three scenarios for the cost of images using digital equipment. To make the comparisons fair, lets assume the digital cameras can take 5400 photos before wearing out.

Much better than 50+ cents but still not a great option due high switching costs.

Let’s do the same analysis for the $200 camera.

That’s a substantial reduction from 50 cents – and because by 2005 many people had high-speed internet connections and access to a computer, the switching costs were coming down. Digital was the only thing that made sense anymore.

2005 was a turning point year for Kodak. Though they managed to maintain revenues somewhat in line with their historic performance, the foundation of their business began to show serious cracks. It wasn’t that Kodak didn’t offer digital cameras, they had both invented the digital camera and introduced a number of digital cameras to professionals and consumers by 1995, the issue was that Kodak couldn’t reconcile going from the 80% margins of film to single digit margins in digital. It was a classic case of the innovators dilemma. In 2007, Apple embraced digital camera modules by including a $10-15 camera in it’s first iPhone. Owners of an iPhone now were able to take photos, store, process and share them all with one device.

To calculate the cost per photo of using a $10 camera module, we do the following:

It’s important to note that this number is only relevant on a comparative basis with the other technologies. It’s quite likely that people take more or less than 5400 photos with one camera but to make this an apples-apples technology comparison I chose to make that variable constant.

Since smartphone cameras have grown in functionality, the number of photographs people take per day/year has grown exponentially. Benedict Evans has written a great post on this. With virtually no switching cost and extremely low device costs (because it was bundled with the overall phone) people would take more pictures than ever before.

What Kodak Could Have Done

To determine what Kodak could have done I’ll analyze what a similar company did at the time. But first lets compare Kodak in 1999 with Instagram in 2014 to give you an idea of how dramatic this market shift was. Here are some numbers for comparison where costs are listed from the consumers perspective: From this data we can see that Kodak was basically the same size in 1999, on a number of images processed basis, as Instagram was in 2013. This is important because on March 31st 1999, Kodak’s market cap was $20.9B. On that same date, Kodak employed roughly 83,000 people. Compare that with Instagram getting purchased by Facebook for $1B in 2012 when it had 12 employees and no revenues. When you consider that Instagram can provide more value to the average person taking photos than Kodak can, you get a sense of the seriousness of Kodak’s situation. Bottom line, Kodak was never going to maintain their film-related revenues and profitability if they stayed in the consumer photography market – film or digital.

Fujifilm: The Archrival That Weathers The Storm

As Japanese industries rose to prominence in the 70’s and 80’s, there was one company that quickly became a sharp thorn in Kodak’s side. Like many successful Japanese manufacturers at the time, Fujifilm was aggressively expanding into new markets and would do so by competing on price at the expense of double digit margins. As the digital age emerged and each business recognized the eventual death of film, Kodak invested heavily into digital photography while Fujifilm placed its bet on document solutions. In 2001, Fuji purchased the majority of shares in a joint venture they had created with Xerox long ago in the 1960’s to build copy machines in Japan. Bringing the majority of profits from this business under the Fujifilm umbrella is often cited by the company as the shelter under which they weathered the digital photography storm.

This graphic comes from their annual report in 2013: This is a nice illustration of how Fujifilm mixed their revenues out of film products as they began to decline and mixed in revenues from document solutions which though not necessarily growing, was still a relatively stable market. In 5-10 years they’ll probably need to have another graph like this that shows them mixing out of document solutions and into some other business platform as well.

Below is a comparison between Kodak and Fujifilm on a total revenue basis: In the graph I label Fujifilm as diversifying their business and Kodak as not diversifying. I don’t mean to say that Kodak didn’t do enough to diversify out of film – they actually foresaw the death of film long ago and invested heavily in digital products. What I mean is that hopping from one technology to another within the same market is not diversifying. To truly diversify and save their business, Kodak needed to move into other markets that were either growing or stable and that maintained healthy levels of profitability. To do that, old dogs like Kodak must learn some new tricks.

I wasn’t there but I would guess that the biggest challenge Kodak had in trying to reinvent themselves was two-fold:

These two issues plague most companies at some point, especially large companies because the laws of corporate physics are so powerful to overcome. In Kodak’s case they could have done two things that might have given them much better chances of weathering the storm:

This prescription sounds great but sometimes it can be tough to know what market to go into. For help in that regard, sometimes all it takes is thinking about the adjacent spaces near the edges of your business. To illustrate this, Fujifilm included several examples of adjacent markets they viewed as business growth opportunities. This graphic from their 2010 annual report shows how Fujifilm was analyzing where they could expand to within the health care field. They already provided several health care diagnostic solutions but what if they expanded into preventative care or health treatment products? Because adjacencies are so close to the business, typically you’ll discover synergies that can improve the value of your offerings over other competitors who may only understand one piece of the puzzle. For example, if Fujifilm’s diagnostic capabilities allow for precise and accurate diagnosis of certain ailments, having that data may help them improve the effectiveness of the treatments for that ailment versus another drug company that doesn’t have as much diagnostic data.

Kodak’s fall from an industrial giant to a bankrupt institution is unfortunate because it was preventable. Just look at Fujifilm for proof of that. The sad part about it is that Kodak supported tens of thousands of people in addition to being a pillar of the Rochester NY community. Anytime a large company like that begins to fail it impacts a lot of people. The silver lining to the story though is it provides business leaders around the world with a rich story to learn from.

9 Responses to "Story of Kodak: How They Could Have Saved The Business"